I stopped watching 24 after the first season, but I can’t imagine that this would ever cease to be appropriate: 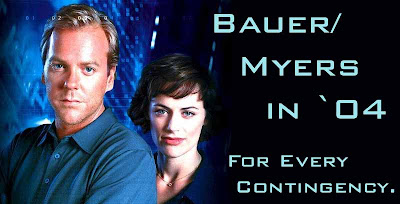 Email ThisBlogThis!Share to TwitterShare to FacebookShare to Pinterest
Labels: Due Process, If You Can Keep It, Pox Vopuli

Ana Marie Cox’s new gig Wonkette has been a going concern since before Thanksgiving, but following the launch announcement from sponsor Gawker on Friday she received a thunderous series of top-tier endorsements: TMFTML, Boing Boing, Dong Resin, Cowboy Sally, Maud Newton, Hit & Run, Crooked Timber, TAPPED, Glenn Reynolds (the Jackie Harvey of the Blogosphere), and the Kiss of Death, Kaus.  Can Cox live up to such inflated expectations, or will her barbaric yawp soon be sampled by every dittohead with GarageBand?
Posted by Eric Scharf at 15:32 0 comments

So I’m re-reading Mickey Kaus’s original Feiler Faster Thesis post (from idle, devil-may-care March 2000), and I’m struck by one key passage: Now, whether or not one wishes to debate the shifts in relative placidity and prosperity over the last four years, I don’t think the jitters caused by the current Dow Jones or Alert Status invalidate the FFT; I think we’ve been accelerated much farther than Kaus imagined.  Given the extreme narrowness of the gap between Bush supporters and opponents, I think it’s clear that the 2004 Presidential Election has already taken place, probably sometime between 07 September 2003 (when Bush asked Congress for $87B for Iraqi reconstruction) and 07 October 2003 (when Californians solved their budget crisis).  This also explains why the DLC is acting as if the next contest before them is the 2006 mid-term elections.

So if the Presidential election is already over, what’s with all the media activity in Iowa and New Hampshire?  That’s easy: it’s the Recount.

Polls are confirming what I’ve been feeling for over a year: the 2004 Presidential election will be the most polarized in decades.  The response to this lack of middle ground—aside from those who disengage entirely—has been to accelerate the already lamentable retreat into political echo chambers.  We were warned: among the many cavils in response to the celebrations of the Internet’s emancipation of political media were admonitions against the Balkanization of information and concomitant distortion.

The MoveOn.org experiment continues to turn heads with its volunteer mobilization, an achievement that probably would not have been possible without some rabid anti-Bush preaching to the choir.  The downside to Internet organizing, of course, is that it is all too easy to lose control over the message, as the kerfuffle over the latest Godwin’s Law violation shows.

What’s been depressing me about contemporary political discourse is that I’m having extreme difficulty modeling the thinking of the average Bush supporter, or, more importantly, the Bush supporter whom I might putatively be able to persuade to change his vote.  At the grassroots level, American politics seems to lack the maturity that comes with realizing that one’s own reason(s) for supporting/opposing a candidate are not necessarily the most persuasive in trying to sway others.  The aforementioned Balkanization will only exacerbate this trend.

I was therefore pleasantly surprised by the winner of the "Bush in 30 Seconds" contest, particularly considering who was doing the judging.  Because I can’t model the worldview that believes the Bush Administration has made the world safer, I don’t have a strategy to disabuse anyone of it.  I am much more comfortable rebutting the post-Clinton assertion that "the grownups are back in charge" by simply referring to the budget.  To every American voter who thinks that the invasion of Iraq strengthened U.S. power abroad, who thinks the Department of Defense Against the Dark Arts Homeland Security is acting wisely and competently, who thinks "moral clarity" is an important quality in elected officials, or who thinks (with little argument from me) that the current crop of Democratic nominees is uninspiring, I would say only this: George W. Bush ran as the "C.E.O. of America;" do you really want to be a shareholder in Enron?

Tired of checking Truncheon every hour day week Tempel-Tuttle perihelion, hoping there’s new content?  Act now to escape this demeaning cycle of self-loathing: sign up for Truncheon’s new e-mail notification service!  Whenever new content is posted, an e-mail notification will be sent to you within 24 hours.  To ensure your subscription request is processed accurately, please don’t offer to enlarge any of our body parts.
Posted by Eric Scharf at 22:37 0 comments